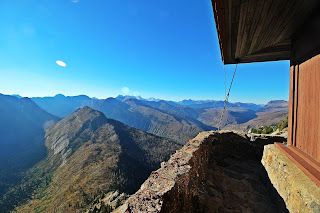 Travelers headed over Going-to-the-Sun Road would be hard-pressed miss the impressive sight of Heaven’s Peak. Although many do miss the tiny structure perched a lonely three miles north of Heaven’s summit. Rarely visited, Heaven’s Peak Lookout is located in rugged country just 10,000 feet from the geographical epicenter of Glacier National Park.

Fire lookout towers remain a part of the Park’s landscape in one way or another. Lookout towers are not only important for fighting fire, but also a meaningful contribution to the history of Glacier. At one time there were seventeen active lookout towers within park boundaries. Today, nine stand and four remain active. Heaven’s Peak Lookout is no longer active but stands strongly on its foundation.

Some friends planned a trip to Heaven’s Peak Lookout and asked me to join. The trek would be challenging, it climbs over 3600’ in about three non-trail miles. Despite the challenge, I was excited for the opportunity to experience this bit of Park history where it stands.

Heaven’s Peak Lookout was built in 1945. It was built by a group of conscientious objectors who traded combatting the Nazi regime during World War II for battling the elements on Heaven’s Peak 7244’ above Glacier National Park. The lookout was in use from 1945-1953. It was in use for only eight years due a trend in favoring aerial wildland fire detection. It was also very difficult to maintain the trail to the lookout. It is regarded as the toughest lookout to reach in the Park. 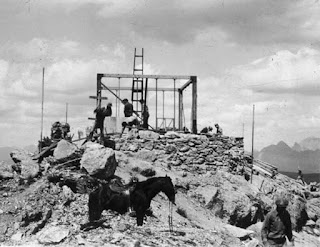 As we headed down the well-beaten path, I felt confident. My legs felt good, the scenery was spectacular and the weather was perfect. The forecast projected a high of 81 in the valley and there wasn’t a cloud in the sky. The crisp fall air gave the forest a renewed energy. The foliage on the thimbleberry and snowberry was beginning to turn yellow and the huckleberry bushes had already turned a deep burgundy. The color palette was ideal for a scenic walk in the park.

After three miles, the route crosses a creek and turns off the trail. The area we were about to enter is in the Trail Creek Fire perimeter. Trail Creek fire occurred in 2003, arguably the most significant fire year in Glacier Park to date. Our route was densely covered in alder, fools huckleberry, thimbleberry, devil’s club, and downed trees, lots of downed trees. The downed trees are charred black from the fire with branches sticking out everywhere. 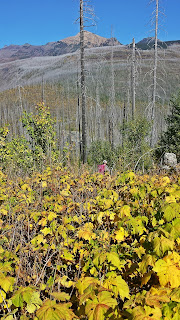 Aside from the difficulty of bushwhacking, everyone was in good spirits. Then the fireweed hit. Fireweed is a pretty plant with purple flowers.  Although, it’s not so pretty when it goes to seed and turns into about a billion fluffy sticky flying seeds. Hence the name, Fireweed is among the first plant to return to an area post fire. The seeds stuck to our sweaty bodies like glue. We had fluffy white seed-beards on our faces, inside of our noses and stuck to the mouthpieces of our water reservoirs. Undisputedly, this was the most annoying part of our expedition.

Each step past the first hour became excruciatingly harder and harder.  My footsteps became heavy as I climbed over log after log. Eventually, my legs became so tired that I began to lift them up by grabbing one with a free hand and tossing it over.

In need of a rest, we found a lunch spot, peeled off our shoes and socks that were now full of leaves, sticks, and rocks. We lunched for longer than we should have but after lunch we found a creek bed that had dried up and was brush free! Moving quickly now, we reached the top of the creek bed and broke into the open. A boulder field lay out before us. 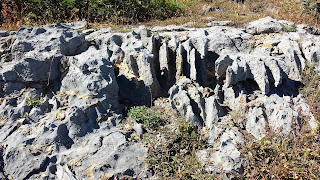 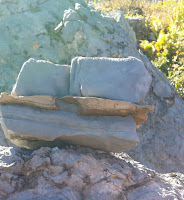 The stromatolite covered rock was no obstacle to us. The fossil creates a razor sharp layer providing a rough surface, perfect for gripping onto.  Even at a steep angle, the stromatolite provided sturdy footing.

We climbed quickly up and out of the boulder field and the lookout began to seem attainable. From our vantage point, it looked like a quick jaunt across a gently sloped meadow and a scramble up to the door. Of course, it wasn’t as easy as that, but it could have been worse.

Finally, we had made it! The lookout stands towering above Glacier National Park like a castle above its kingdom. The 360 degree view is worth the pain of the journey. 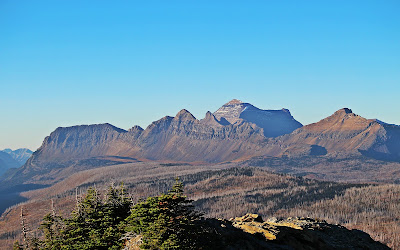 The west side of the lookout sits on the edge of a 1000’ foot sheer cliff. The south side looks out to the ridge of Heaven’s peak, while the east side looks over the way in which we came. To the north is an old steep abandoned pack trail.

The pack trail was used to resupply the lookout. This is also how building supplies were delivered in 1945. The trail is so steep, it’s a wonder horses, mules, and packers were able to bring anything up it at all. Stock packstrings are still the most common way supplies are delivered to lookouts in the Park today.

An ironclad catwalk and foundation of rock protects the lookout from falling off the cliffs to the valley below. The lookout is completely boarded up but a visitors log hangs from the doorway. The log shows evidence of visitation and talks about the recent restoration project.

Before 2012, the lookout was barely standing, now it stands proudly with a roof and four functioning walls. The restoration project was funded by the Glacier fund, the Mennonite community, and other private donors.Interestingly, the crew who provided most of the labor for the restoration are relatives of the original group who constructed the lookout seventy years ago. Their work is solid and the lookout is beautiful.

As my friends and I took in the beauty that the lookout provides, we didn’t talk a lot. I think in part because we knew we still had a big day ahead of us, but also because we were paying the moment respect. The wall’s on this remote structure hold both the history of those who staffed it and the hard labor of the family that built it seventy years apart. I felt both inspired and emotional. 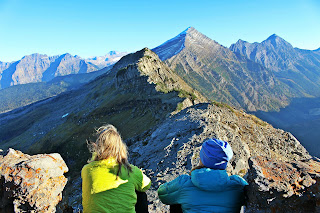 We sat as long as we could before we knew it was time to head back. I don’t think any of us looked forward to the hike back. But, I do know I looked forward to the creek crossing at the end of the brush where I could soak my tired feet. And, just a bit further would be our car and the cold beverages we left there! Without complaint, we turned and hit the trail. 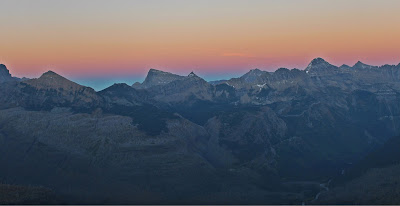