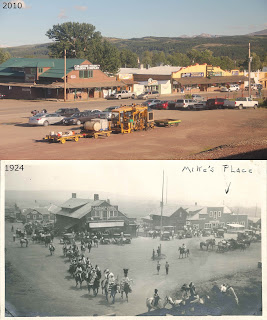 The earlier picture, marked circa 1924, was, according to my records, taken on July 4 1924, and shows the original building, the LaPlante Pool Hall, that Mike Shannon bought from John Lindhe. Mike renamed the pool hall Mike’s Place. The 1924 fire occurred later in the month, after the photo was taken, so it is one of the last views of the hall before the fire.