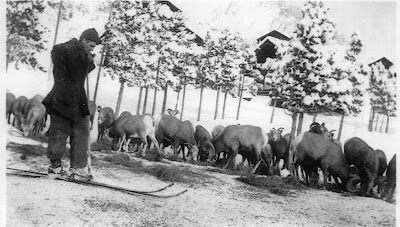 Thomas Sorkness sent us this image with the following description:
Arne Sorknes, feeding the sheep at Many Glacier sometime in the 1920s. He was the location engineer and winter caretaker at Many from the fall of 1924 to 1930/31. You can see the McDermott Chalets in the background.
Thomas also mentioned to me in an email that the skis that his grandfather is using were most likely ones that he made himself. The chalets that are mentioned in the background were the McDermott Chalets were named from McDermott Lake which was the original name of Swiftcurrent Lake. Only a couple of the chalets remain after the Heaven's Peak fire of 1936. One of them is the winter caretaker's cabin which you can find out more about here.